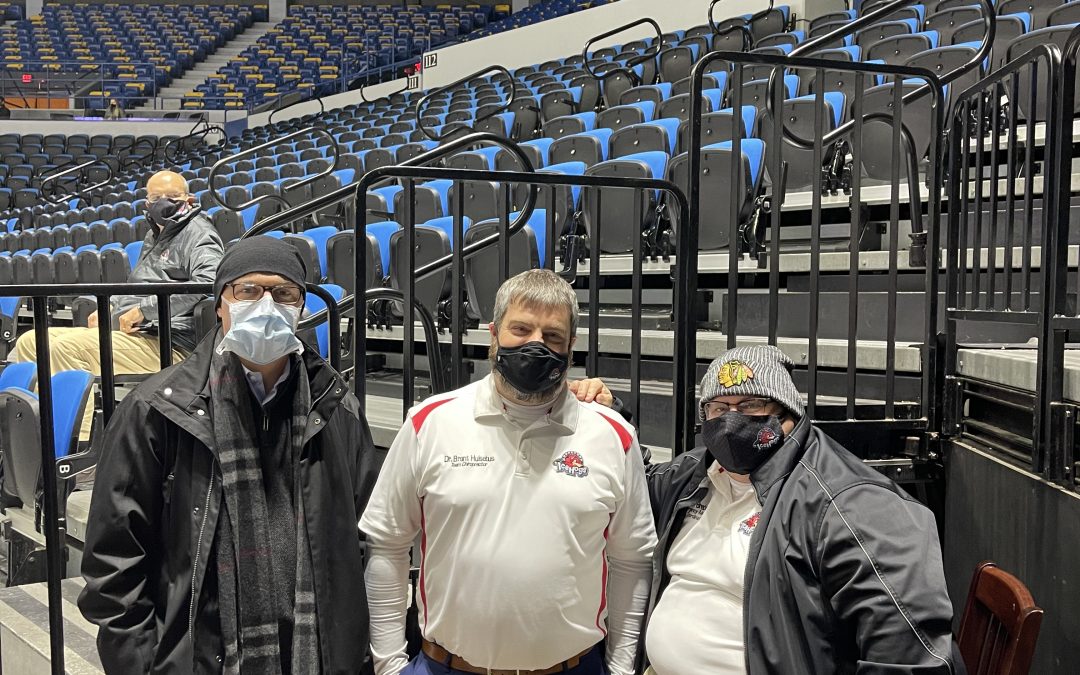 Today is Saturday, February 7, and we are eleven months into COVID-19. I wanted to take a minute and write up an experience I had today that needed to be documented. COVID-19 has changed the world; and, the professional sports world is no exception. During my 16 seasons as the Team Chiropractor for the Rockford IceHogs, I have seen many things. I have witnessed bench-clearing brawls, horrible injuries, power outages during the game, and now a game with no fans. 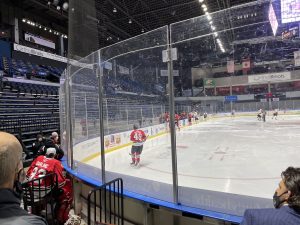 Our delayed season started in February this year due to COVID-19. I was assigned to cover the first game of a shortened 30 game schedule. Typically we start our meetings in late summer and get together several times prior to the start of the season. We usually have several medical team meetings with all the physicians from various practices including Emergency Room, Orthopedic, Family Medicine, Chiropractic, Dental, and EMS. We will spend one night practicing various what-if injury mock-ups on the ice with players pretending to be injured and everyone understanding their role. We have meetings around the table discussing game day responsibilities and watching various PowerPoint presentations preparing for new NHL regulations and rule changes. This year was different – the season wasn’t the only thing shortened, so were our preparations – only one quick zoom conference. 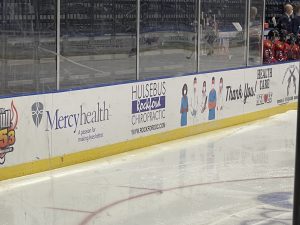 Prior to the game, I would have to make sure I was safe to enter the “bubble”. The first step was a blood test to see if I had the antigens for COVID-19. The next step is a nasal swab the day prior to the game coverage. This swab is then driven over to the Orthopedic Clinic where an IceHogs team representative will take all the nasal swabs and fly to New York City to get them tested. We will get our results at 6 am the next day. At 6 am on the game day our phones send us a reminder to log into an app and fill out a questionnaire on our health and who we have been around. Then,  after successfully answering these questions and with clear test results, we are given a pass that allows access into the arena. 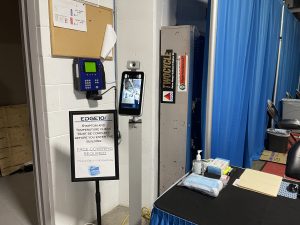 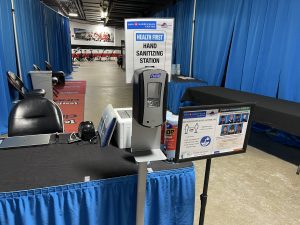 Once we enter the arena we put our faces into a computer screening device that scans us. If we pass that our next step is a temperature check. Should there be any questions on our results, rapid tests are then available where you are put into a holding area until you are cleared. 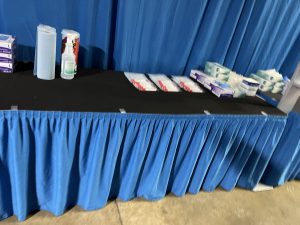 Once I cleared and was allowed into the bubble, I can start to see the changes. The first thing that struck me was finding the player’s lockers in the hallway. I had never seen all the exercise equipment so spread out in the hallways. The other thing that was missing was the players. Typically I see them playing soccer or just running around. The new rules will not allow the players to arrive prior to the game that early. 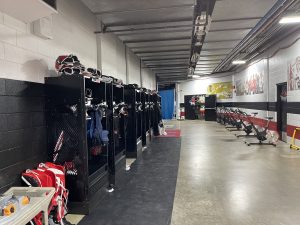 I was then told to go to the team physician’s room. This is a new room where we are to stay before the game, during intermissions, and after the game; affecting isolation to decrease contact with other people and the players. This is one change I liked. Previously, we were with the team in the locker room and I tried my hardest to stay out of the way of the coaches, players, and locker room personnel. This new room felt like one room where I could relax. I found my colleague and friend, Dr. Scott, already there and already working on paperwork. I was given a team-approved mask to wear and called into the player’s locker room where my chiropractic table is kept.

Once in the locker room, it was also odd because I was used to players sitting around the lounge area with food and snacks out. New normal, the countertops were empty and seats vacant. 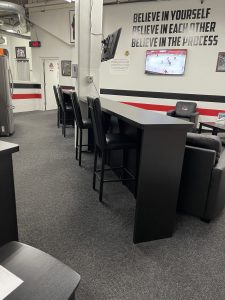 Once I walked out of the player tunnel and saw the ice it was also an odd sight. All the usual season ticket holders, game day staff, and photographers I have gotten to know were all absent. You could hear a pin drop; the arena was eerily empty and silent. We simply grabbed any seat we wanted and prepared for the game. The IceHogs performed all the normal player introductions and pregame announcements for the fans at home and for the players; we felt special like this was just for the physicians. The only other people we saw watching the game were players who did not dress for the game. 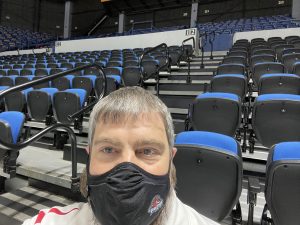 It will be interesting as the season unfolds, as regulations and cautions relax, to watch our team and our sport unfold over the next 30 games. However, in the meantime, I enjoy being able to catch as many pucks as I can since Dr. Scott Trenhaile is my only real competition in catching the puck. I also plan on winning the chuck a puck.